Raw meat and your dog – a controversial subject 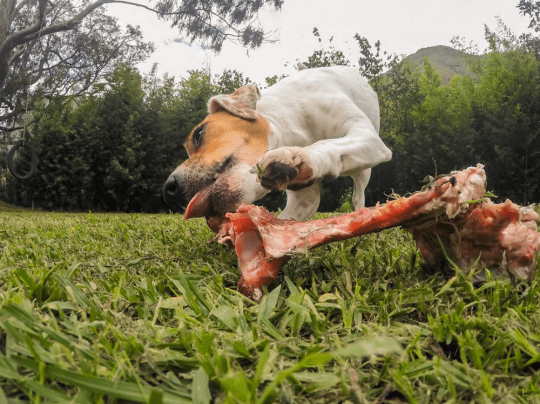 Dogs are descended from wolves, right? So, they should eat what wolves eat in the wild, right?  This is the basic tenant believed by those who support a raw diet for their dogs.  This is a highly contentious subject and, one that generates strong views.
A leading proponent of raw diets for dogs is Dr Ian Billinghurst, a vet who promotes the BARF diet (Bones and Raw Food) based on the theory that wolves eat raw meat in the wild so dogs should too.

Unfortunately, his arguments are based on no scientific data, at all. He, and the supporters of BARF argue that wolves don’t eat dry food. That’s true but it ignores that the domesticated dog is long separated from the wolf in evolutionary terms.

Both sides of the argument make spurious claims, making it difficult to decide on which side of the fence to sit.

BARF proponents argue that all commercial diets are inadequate and unhealthy for our dogs. In fact, Billinghurst claims that most degenerative diseases in animals are a direct result of commercial foods. That’s again based on zero clinical research.

A huge range of conditions in dogs are blamed on the horrors of feeding commercial food to them by BARF advocates.

The other side of the argument, discussing the risks of and reasons to avoid raw diets, is put forward

by Brennen McKenzie –  ‘Raw meat and bone diets, it’s enough to make you barf’.   Again, this is not without its’ flaws and unsubstantiated claims.

McKenzie claims that “wolves kept in captivity live longer than wolves in the wild. And what are captive wolves fed? Commercial dog food. Evidence suggests captive wolves fed raw diets suffer from poor nutrition and health. Wild wolves often die because of disease, parasitism and malnutrition.’  Some of this is true – wolves in captivity do, indeed, live longer. However, a review of some of the institutions that keep captive wolves, reveals that they are, generally, fed a raw diet, similar to what they would eat in the wild.  Commercial food is used, sometimes, to supplement the diet.

The assertion that ‘ wild wolves often die because of disease, parasitism and malnutrition’ is plausible. It could be argued that the ‘raw’ meat elements of their diet could be the sources of parasitic and other diseases, contributing to mortality.

Commercial dog food is accused by BARF fans of making dogs sick, being indigestible because of grain content, lacking nutrient content and, most crazily, of being made from dead pets! None of these claims are substantiated by research.

Many raw diets have been found to contain pathogens including E.coli and Salmonella which are harmful to our dogs and us. For me, this is the major source of concern.  In my, humble opinion, from a common sense perspective, it seems logical to cook meat before feeding it to our dogs.  Why take risks?

The bones contained in raw diets have been known to cause intestinal obstruction and perforations. In the US, the Food and Drug Administration (FDA) has warned pet owners against feeding bones to their dogs.

There appears to be no evidence for BARF diets. They are not based on sound research. I would go as far to say that feeding dogs on RAW foods is tantamount to playing Russian roulette with their health.  I am open to this view being challenged when there has been proper clinical research into this area.

This, of course, is a personal opinion based on my medical knowledge gained while serving in the medical branch of the Royal Navy, an understanding of food hygiene and, most importantly, applying some common sense.

A lost cause… Who comes first — the Vet or the Behaviourist?

Failing our dogs – when advice is just wrong

Dogs and our mental health